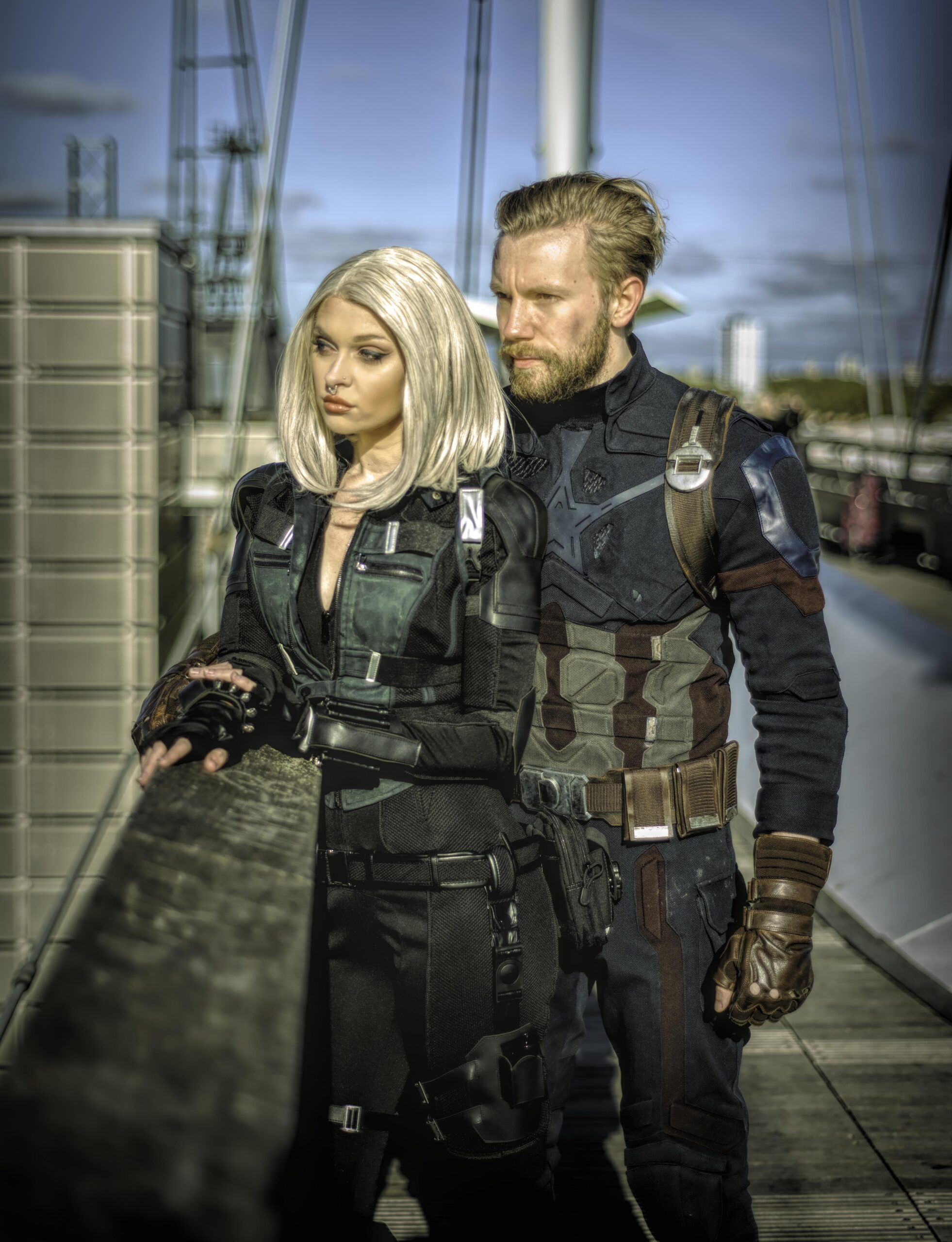 This is Shots by Shinobi’s Cosplay Spotlight: Valentine’s Day edition.  I first met John in 2017 at MCM Comic Con London with no shirt on and it has always been a pleasure seeing and getting to know him since then.  He has fallen in love with another cosplayer who is also amazing since then.  They are couples goals to the infinity and deserve to be the Valentine’s Cosplay spotlight.  When I met John he was cosplaying the Joker with no shirt on and covered in tattoos.  He was quite pasty…or was it tasty.  It is worth mentioning that John is one of my main inspirations when it comes to the hitting the gym and he gave me some advice when it comes to shirtless cosplays.  Since then he has managed to keep his shirt on instead of being the thot he was.  I believe I met Zoe when she was cosplaying Harley Quinn and she was stunning as always.  They have both become quite the power cosplay couple.  They have been interviewed by BBC Radio, promoted MCM Comic Cons, been interviewed on the live stage at MCM and even met the Mayor of Manchester.  I caught up with the couple at MCM Manchester and they were awesome enough to chat with me.  But really that is no different from any Con we all attend.  These are two of my absolute favourite people let alone cosplayers and if you have spent anytime around them, I think you would agree.  Let’s find out what got them into cosplay and how their life has changed since cosplay brought them together.

What got you both into cosplaying?

J: I got invited along to MCM London a few years back as a friend had a spare ticket. I just wore an old Stig (Anyone remember Top Gear?) costume I had from Halloween and had an absolute blast! From there it just grew for me.

Z: Exactly the same for me! A friend had a spare ticket to MCM London so I was like, why not, it sounds fun! Then when I got there, I saw all the cosplayers and their incredible costumes, people dressed up as characters from my favourite shows that I thought no one else had even heard of, and everyone just bonding and having a brilliant time. So I was like, I WANNA BE HARLEY QUINN!!!!

You both met through cosplay and at a MCM Comic Con, how great is it that you two have become the face of MCM?

J: It’s pretty surreal for me – I mean I just feel like I’m riding on Z’s coattails ultimately as without her Noone would know who the man behind the mask is! But no it’s kinda crazy how its been.

Z: This is going to sound super cheesy but, please pinch me! I never in my wildest dreams thought that I would be a poster girl for MCM! Being the face for my favourite con, doing my favourite hobby, with this tasty piece of (vegan) meat on my arm! What more could a girl want?!

How has your life changed since you have built your relationship with MCM?

J: It’s probably a little busier? Like at Manchester we were over at BBC Radio for 7:30AM on the Saturday, but wow – some amazing opportunities that I’d never have had the chance to do otherwise! It’s not every day you get to pose in front of yourself on a tube platform!
Z: Life has been amazing. I mean, for the obvious reasons, for example, I’ve been on BBC News, ITV News, MCM bus posters, London  Underground tube posters for MCM! But honestly, I think the best thing that has come out of this relationship is the people. The MCM staff are incredible , insanely hard working people and I’ve been lucky enough to meet hundreds of other cosplayers after being recognised  on posters or meeting people after our talk on the Live Stage at MCM Manchester! I would have never gained such incredible friends without MCM!

Do you have a cosplay pet peeves?

J: I’m not sure if it’s a pet peeve but I wish I could be a little bit less of a perfectionist? There’s too many things I’ve redone or not worn until its 100% and I wish I could be someone who just says ‘yeah that’ll do’.

If you could go anywhere in the world how to cosplay where would it be? (Hint hint Dragon Con is awesome…)

J: I would love to do Dragon Con, SDCC and New York – Also MCM Glasgow and see how it is in Scotland!

Z: EVERYWHERE! But seriously the American cons seem absolutely incredible! I would also like to explore more of the ones in the UK too! I only went to MCM Manchester a few months ago for the first time! It’s crazy how many awesome events are right on your doorstep and you don’t even realise it!

What has been your favourite convention thus far?

J: For me it is probably MCM Birmingham in March 2019 or Manchester in July just gone – In March Zoe up on massive posters and all over – but in Manchester we got to meet some amazing celebrities backstage. I would say MCM May this year as I got to meet Sebastian Stan but Zoe was so ill that day she couldn’t be there L .

Z: I’m going to be cheesy (yet again) and say that MCM May 2018 was probably my favourite because it was the first time I cosplayed together with John! But a close second would definitely be MCM Birmingham 2019 because it was just so surreal seeing my face blown up to the size of a house! I also have no idea how, but I managed to befriend Osric Chau (Supernatural) and we hung out at the pub!!

What has been your biggest moment since you started cosplaying?

J: Either the first time I did topless Joker – that was pretty big as it was a culmination of a lot of work and sweat! And the reaction was incredible too. I think the other one would be MCM October when we first did IW Black Widow and Cap together, that was so crazy and an amazing weekend.

Z: YESSSS! The first time we did Black Widow and Cap together we went to the Avengers Station at MCM London and people thought we were part of the exhibit and were there for about 2 hours taking photos with people! It was incredible and such a compliment that so many people loved our cosplays! I could have cried!!

If money was no object what would be your dream cosplay?

J: I think like an Iron Patriot suit? Fully functioning with electronics etc – but I think it would be a little unfair on Z as she’d end up being my handler all day!

Z: Oh gosh, I have no idea! Ever since me and John got a mortgage I’ve tried to be money smart about cosplay dreams haha! I guess I would love to do Beauty and the Beast! But that dress and the beast head would probably be like having a second mortgage!

John how has losing weight changed your life?

It’s made me a lot more confident in myself – and given me a new compulsive hobby of getting to the gym! Frankly these last few months have been hard with us moving into the house and all the work that goes into that – but we’re back on track now and gearing up for MCM in May.

Zoe when did you become a vegan?

I became a vegan about 4 years ago! I’ve been vegetarian since I was around 7 years old because, to quote little Zoe, “animals are my friends, I don’t want to eat them!”. As I got older and learnt more about the environmental, health, and animal welfare issues surrounding the meat and dairy industry and I then made the change to veganism!

Do you feel it is important to continue to educate people on veganism?

Definitely! When I was a vegetarian I would say “I eat eggs because they’re just chicken periods, I drink milk because a cow needs to be milked!”. But it wasn’t until I met fellow vegans and started actually questioning what I’ve been told and what is normal, that I came to realise I was being incredibly naïve. I want to be the voice that animals don’t have!

What is the most difficult cosplay you have done?  Why was it difficult?

J: I think our current one’s we are working on – BatJoker and HarleyRobin. It’s been a real ground up build – that have let us learn new skills as we’ve had to glue down body suits to muscle suits, puff paint the entire things, designed and created these awesome 3d rubber Joker emblems and even sewn capes!

Z: Definitely HarleyRobin! I think puff painting should legally be listed as a form of torture!! But in all seriousness, I absolutely love a challenge. This cosplay gave us so many hurdles and so many opportunities to learn! Now we’ve we completed them we’re itching to find a new challenging cosplay to tackle!

Have you learned more about yourself since cosplaying?

J: I’m not sure – probably that I was a lot more artistic than I ever thought? Like I failed in art so hard back at school…

Z: I completely agree! I never thought I was artsy, creative or confident in front of a camera! I was a very shy science nerd! Cosplay really brought me out of my shell!

How does it feel to be on advertisements across the U.K.?

J: Ultimately for me it’s hilarious to be the face of MCM but actually only it’s the mask of MCM…

Z: I’m still not quite sure I believe it!! 5 years ago, if someone told me I would have been on a London underground poster I would have laughed in their face for sure!

J: Have a hobby you can share together, I guess? It’s definitely brought us closer together. Also always go to bed on a happy note. No one wants to go to bed angry and upset – it’ll wreck your sleep and make you feel worse in the morning.

Z: It is a cliché but a cliché for a reason – communicate!! No one is a mind reader (in real life anyway). Oh, and don’t compare your relationship to other couples. Everyone is different and of course other couples aren’t going to share the time they argued about who ate the last cereal bar on Instagram haha!

You can follow John and Zoe on social media at: