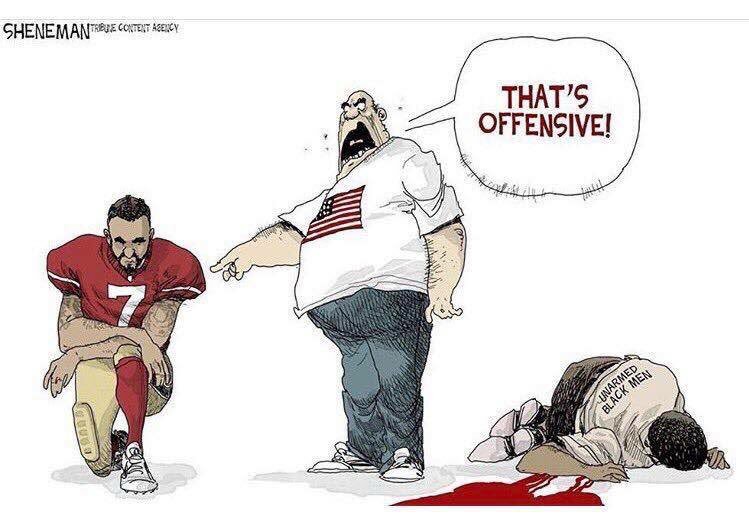 Everyone that has stated Kap was wrong or not addressing the actual problem is no different than people during slavery and civil rights movement that stood quiet.
People are afraid to stand up when they know something is wrong and continue on with it just like it was done during slavery and during the civil rights era.
People always feel deplorable about slavery and wonder how this could have happened and that they would never agree with it.
I disagree.  People fall in line and go with the flow no matter how bad it is.  By not speaking out you agree with it.  How many people agreed with Rosa Parks?  Yea not many.  If they did disagree they were quiet about it then just as they are now.  Sit in the back and know your place black woman.  She was brave by refusing to get up and the boycott ensued.  Look what it accomplished.  How many people are down for the long haul these day?  How many conveniences can you do without for the bigger picture?
How many people know Jesse Owens.?  Black gold medalist in the Berlin 1936 Olympics.  Yea he and other blacks almost boycotted the Olympics because of how they were treated in America.  He went anyway and whooped all competitors in front of Hitler.  After coming home he had to enter his own celebration in the back of the building and wasn’t invited to the White House to be celebrated with other champions.  How many complained about this then?  Would you now?  Quiet….crickets again.
If you are quiet, indifferent or don’t care about what is happening in the discrimination and killing of unarmed blacks now you too would have felt exactly the same during the civil rights movement and during slavery.  Many owners could not even stand to see their slaves whipped because it was wrong but they had other’s do it when they couldn’t stomach it.  Even forced blacks to…
Tell me again how this is not related?
“I would have never participated in slavery”
“Everyone deserves equal rights and I would have been apart of this”
“blah blah blah”
Sure you would have and how is this different?  The thinking is the exact same.
I have heard people say “I would hit people blocking a highway; run them over because MLK would never do such a thing.  Brush up on your history he did the same thing and you are no different than the people that through glass bottles and sprayed them with water hoses while they just want to be treated fairly.  It is this same thinking why the fight is still going on today.  YOU are part of the problem.   YOU are all the same people that are okay with discrimination and are not for equal rights.
Everyone was so sad when Muhammad Ali passed.  He was a hero but the majority of you were not calling him a hero while he was able to speak.  How many of you agreed with his decision not to go fight in a war when he didn’t have equal rights in his own country?  Where would he have sided and stood on this Kaepernick situation?  We know his voice would have been heard.  I mean Trump avoided the war for not being “physically fit” while playing college baseball and you sure didn’t care about that because you voted for him.
Admit it and let’s move forward amicably (somebody will get this reference).
We as blacks have been targeted literally since the beginning as the creation of the police was to track down runaway slaves.  It is no wonder that targeting blacks has continued since then.  Here are a few examples below.  I have my own experience I can also add to this.
Straight from the Department of Justice on the Baltimore police:
https://www.washingtonpost.com/news/the-watch/wp/2016/08/10/the-justice-departments-stunning-report-on-the-baltimore-police-department/
Alabama police framing blacks:
https://www.youtube.com/watch?v=icLEg2H08S4
The Kap challenge.   Name me 20 QBs better than him in the NFL right now.  I’ll wait.
If you are offended by the kneeling and not the killing of and targeting of unarmed blacks then YOU are part of the problem. 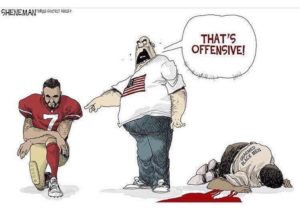 So we boycotting or not…