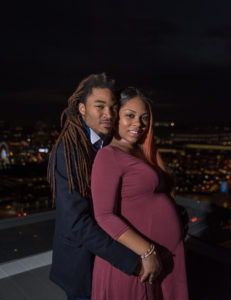 one and Ty were married recently and wanted to do a post wedding shoot in Atlanta.  I scouted a located downtown Atlanta that would be amazing.  It was on the helipad of the W Hotel in Atlanta.  The views there are spectacular.  It was actually perfect weather on this day and we shot shortly after sunset to get the lights of the city in the images.  Shooting here would be great no matter what time of day but I was going for something specific.  We were escorted to the helipad by security but we only had 30 minutes to work.  I tried to get the flash set up as fast as I could.  I didn’t have my octabox which would have made my images better.  I lost some time because the batteries in my flash were not working even though I put a fresh pair of batteries in before the shoot.  Luckily I had a spare pair of batteries.  I had the flash resting on a tripod.  I took some images of the couple and then took some long exposure images of the city.  Follow @tonethegoat on social media as he is a rapper, producer and actor from Atlanta, GA.  Check out the images below.