If you are like Allen Iverson you probably don’t want to talk about practice.  But he would not have been as good a player if not for playing in countless pick up games as a kid, in high school, in college or in the NBA.  All the hours spent playing basketball for him are practice.  Practice makes perfect.  My cousin @tonethegoat and I have always talked about perfecting your craft and how it takes 10,000 hours of practice to do so.  He has been making and producing music for over ten years so he feels as though he has mastered his craft.

Malcolm Gladwell stated that it takes ten thousand hours of practice to master a field.  Forty hours per week over 5 years will give you 10,000 hours of practice.  Sometimes we are practicing and we don’t even know we are because we enjoy what we do.

Learn to love practicing.  I have only been at photography for 2 years so I have a lot of practice to go before I master it but I am glad to see the progress I have made so far.  Practice as much as Bruce Leroy did until you don’t even realize you are the master.  Here’s to reaching the final level.  The glow!

“We talking about practice.”

It took a lot of practice for me to learn how to take the long exposure below.  It was taken in Atlanta at Jackson Street Bridge which is a famous spot to take a picture in Atlanta. 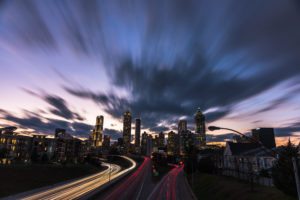