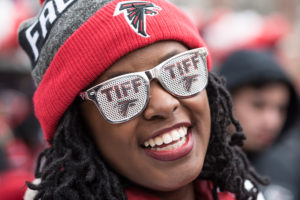 There will never be another place like home for me and home is Atlanta.  I have been a lifelong Falcons fan and have endured many losing seasons and have never saw my team win the Super Bowl.  In fact the only one of my teams that have won a championship is the Atlanta Braves during the 90s.  It was an unfortunate circumstance that I had to come home during Super Bowl week but I can’t deny the energy in the city is amazing.  Atlanta has always been a city of transplants as many people come here so yea there are going to be band-wagoners but everyone is believing in this team.  I am seeing Atlanta inspired music playlists that put me back to reminiscing about the good ole times and it brings a smile to my face.  It is a combination of Old Atlanta and New Atlanta that is has come together in a love for sports and the Atlanta.  The city has so much character and life and it is on display right now.  At the pep rally at Atlantic Station I captured some photos which you will see in the gallery below that captures the spirit of the people of Atlanta.  Even Santa Claus is a Falcons fan, it must be the red.  There was an old man that had an Atlanta Falcons prosthetic leg that was awesome. In the face of everything that is going on in this country it is great to have something to cheer about that also unifies people.  Chants of rise up, we ready and we too deep just warm my heart. This team seems to have a touch of destiny about them.  In fact my little cousin Penelopea was born last January and I bought her a pink Falcons’ onezee and wrote a note that she would be wearing it in 2017 watching the Falcons win the Super Bowl.  My prediction is looking really good right now.  I wish my grandma and auntie were here to experience this but I know they are both with me and always will be.  This is for all the Falcons supports that have been waiting for so long for this elusive championship.  Nothing but Atlanta music is on my playlists for the week.  And shout out to @tonethegoat and ChuckB for creating the new rise up anthem. Rise Up Anthem: