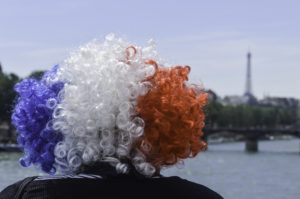 I made it to Paris for the Eurocup finals where France was playing against Portugal.  The city was buzzing as fans from both countries represented with their colors and favorite players jerseys.  This was not my 1st visit to Paris, more like my 10th, but I still visited the major sites including the Eiffel Tower, the Louvre and Notre Dame.  The game was electric and Christian Renaldo went out early and all looks bleak for Portugal as France dominated the entire match but they never scored a goal.  It just had the feeling that France would eventually score and I was looking forward to the party that was to occur after.  Portugal ended up winning and you could see the joy and pride of one country and the anger and frustration of another.  I can tell you their people from Portugal riding around all night honking their horns and waiving their flags.  In the morning I woke up to broken storefront glasses, burned mopeds in the street and even damage to the Eiffel Tower area as that was one of the viewing places for the game.  I tried to capture some of the spirit of the day so check out the gallery below.