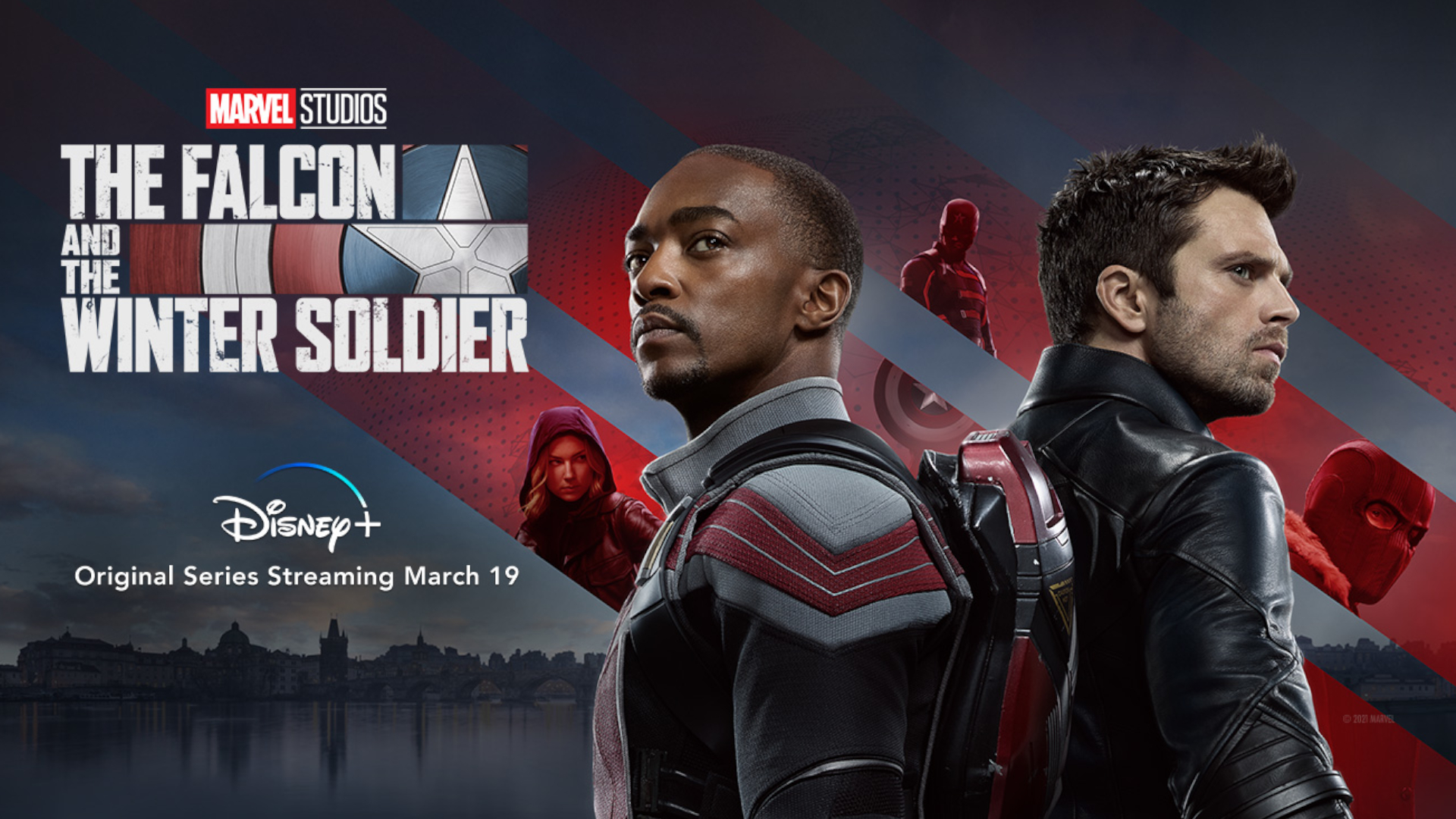 “They would never let a Black man be Captain America. And even if they did, no self-respecting Black man would ever want to be.”

America is racist. The writer of the show clearly knew this. It was obvious from the beginning that race was going to be a key subject in this series. We first see Sam giving up the shield and being told he was doing the right thing a a white man. As a Black man it was clear to see that Sam was pressured into giving the shield up as the country was not ready for a Black Captain America. It is a privilege not to have to think about your race when you make every day decisions. Sam didn’t have that luxury. Of course Sam thought the government was going to leave the shield in a display case. We see Sam and his sister struggle to keep their family business afloat. This leads them to pursue a small business loan where Sam is denied. Sam fought Thanos twice and risked his life twice and saved the entire universe from the wrath of Thanos. For that his prize was not being able to secure a loan. At the end of the first episode we see the shield given to a white man, John Walker, with blonde hair and blue eyes. They basically are telling Sam that he is not worthy of the shield. Even though the previous owner of the shield told him he was.

Next we learn about Isaiah Bradley who was a Black super soldier that was arrested and put in prison. He was treated like a lab rat and inhumanely experimented on by the U.S. He was not given the Steve Rogers treatment. No one even knew he existed. This is a reference to the many Black people that are imprisoned unjustly and brutalized by the justice system. Bucky was upset with Sam for giving up the shield and Sam replies y’all don’t understand. Referring to Bucky and Steve because they are white and couldn’t understand the complexities of being Black in America. When leaving Isaiah Bradley’s house Sam gets racially profiled by cops who ask one of the most lethal killers in all of history if Sam was bothering him. The cops didn’t back down until Bucky said don’t you know who this is. If you are Black in America you likely have had an encounter like this with the police. The new Cap, John Walker, is a walking symbolism of white supremacy and white privilege. He is uplifted by Black people the entire movie including his best friend Lemar and he is entitled and thinks he can do whatever he wants to. He used police sirens outside a police station to get Sam’s attention which could be triggering for a Black man.

The theme of white supremacy was often brought up by Zemo. “The desire to become a superhuman cannot be separated from supremacist ideals. Anyone with that serum is inherently on that path,” Baron Zemo. When we think about it Steve Rogers spent more time in the MCU fighting the U.S. government rather than alongside it. John Walker is impatient and aggressive and he sees this opportunity as Captain America to prove that he can change things and prove that he is a good man. He is not.

We meet Karli Morgenthau who is the leader of the Flag Smashers that represent refugees or immigrants that have been displaced by the Blip. In one episode Karli says, “These corporations and the beasts who run them, they’re the supremacists.” Supremacy is one of the main themes of the show. The Flag Smashers are a radical group advocating for open borders. Karli leads a group of multi-racial refugees who demand that the Global Repatriation Council provide housing and help to the people displaced after Ironman’s snap in Endgame. The Global Repatriation Council are forcefully relocated poor refugees and Karli will kill anyone to stop this.

John Walker had his entitlement on display when he told the Dora Milaje they don’t have jurisdiction when he is in a foreign country too. Then Walker comments about their pointy sticks like they are some African uneducated third world nation. This was so white and American to say. Then the Dora proceed to whoop his ass. I quite enjoyed that. He didn’t decide to take the serum until Black African women warriors beat him down. Sam tried to warn Walker. He said you would be better off fighting Bucky. He didn’t take the advice. The only reason he had that serum was because of Isaiah Bradley’s blood and the experiments he went through. The serum in Walker’s body came from a Black man and he only got the shield after a Black man was pressured into giving it up.

Lemar Hoskins’ death that serves to reveal the true Walker to the world. Lemar was the Black best friend who serves as emotional support to a white man. We saw Lemar give his life for white supremacy and Sam give up the shield for white supremacy. We see white privilege play out when John Walker kills a man, a foreign national in public. On video. An unarmed man. Sound familiar. Then he goes and yells at his prosecutors in a courtroom where he is not put in jail or prison. He just walks. There wasn’t even protest after he killed a man in cold blood with the shield on video. He got what cops get after killing an unarmed Black man. He basically got put on administrative leave. That was it. He shows up at the end of the show to help save the day and there is no accountability for his actions. Throughout the series Sam constantly proves to be deserving of the shield. He is not quick to fight, is level headed and shows compassion and empathy. John is aggressive and a bully which is not what Steve Rogers represented. Walker and Sam Wilson are both soldiers of war that walked away from those experiences with different views. Wilson came back to help serve as a counselor for veterans. Walker wants to continue fighting in wars.

Isaiah told Sam they erased his history. They have been doing that for 500 years to Black people Isaiah tells Sam. The only reason he is alive is because the government thinks he is dead. Isaiah Bradley said “They would never let a Black man be Captain America. And even if they did, no self-respecting Black man would ever want to be.” I felt this quote. It was real. Sam has to be thinking how can he represent a country that has never represented him? It is a legitimate question.  If Sam Wilson is going to take up the shield and Captain America mantle, he will have to openly acknowledge that America as it exists is racist. He will have to become a Captain America grounded it a new America that is yet to be. One that he is focused on making real and immediate change in. He can’t be concerned with past ideals that only work for white people. I do have a few issues with what happened after he saves the day as the new Captain America. In the real world conservatives in the government would question Sam’s legitimacy after he donned the suit and carried the shield. One theme that was missing for me in this series were conservative politicians. Sam’s last speech would not just have been accepted by all politicians. That would be a huge uphill battle and most of those people will not ever change. Here is Sam’s last speech.

I’m a Black man carrying the stars and stripes — what don’t I understand?

Every time I pick this thing up, I know there are millions of people who are going to hate me for it. Even now, here, I feel it. The stares, the judgment, and there’s nothing I can do to change it. Yet I’m still here. No super serum. No blonde hair or blue eyes. The only power I have is that I believe we can do better. We can’t demand that people step up if we don’t meet them halfway. You control the banks! Shit, you can move borders. You can knock down a forest with an email, you can feed a million people with a phone call. But the question is: Who is in the room with you when you make those decisions? Is it the people you’re going to impact or is it just more people like you? I mean, this girl died trying to stop you and no one has stopped for one second to ask why. You have to do better, senator, you’ve got to step up. If you don’t, the next Karli will. You don’t want to see 2.0. People believed in her cause so much, they helped her defy the strongest governments in the world. Why do you think that is? 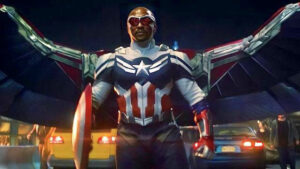 Overall this was the realest production Marvel has ever done. Period. They touched on a lot of racism, nationalism and white supremacy in the show. We need more of it. The Falcon and the Winter Soldier had a Black writer and producer,  Malcolm Spellman, and it showed you why representation matters in front and behind the camera. We will now refer to the show as Captain America and the White Wolf.

The serious ended with Sam saying the following to Isaiah:

“I might fail. Shit, I might die. But we built this country. Bled for it. I’m not going to let anybody tell me I can’t fight for it. Not after what everybody before me went through, including you.”